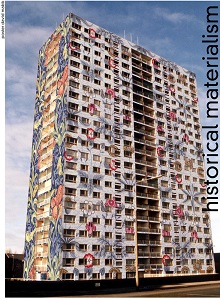 This year marks the first of a series of centennial commemorations and anniversaries, starting with that of the first worldwide inter-imperialist conflict. Centuries of colonialism and imperialism served as a preparatory phase for the catastrophe. Indeed, while the main parties of the Second International trampled the revolutionary socialist tradition in trench-mud, the First World War destroyed the illusion that imperialist violence could be wreaked on the colonies while leaving Europe untouched. If capital came into the world ‘dripping from head to toe, from every pore, with blood and dirt’, Marx’s analysis of ‘primitive accumulation’ has certainly not been confined to a pre-history of capital.

And yet, contrary to all expectations, despite these tremors and shocks, despite the terrifying glances into the abyss of destruction, capitalism has survived. Not only has capital muddled through; it has mutated, adapted and, by some criteria, emerged stronger than before. At the same time, however, new contradictions and crises have appeared, expanding the spaces of critique to the ecological and the ideological terrains and opening up new possibilities of revolutionary breakthrough.

In recent years, the crisis and the movements emerging in response have re-opened an opportunity to envision, and fight for, substantive alternatives. But these movements have remained fragmented and have faced increasing state repression and imperialist aggression. And the on-going crisis is now raising the stakes. It is clear that this crisis is indeed global, leading to deepening austerity in the North and undermining the conditions for sustained growth in the South. If, in the North, the ‘war on terror’ manifests itself in intensified state racism and Islamophobia, the crisis is also intensifying and bringing to the surface underlying international rivalries. The winds of war from the South are reaching Europe once again. But from the South, movements worldwide also bear witness to countless examples of struggle and resistance.

At this year’s conference, we want to explore capital’s capacity to survive in order to explore, first and foremost, how it can be overcome. We are interested in investigating contemporary geographical reconfigurations of accumulation and interrogating theories of imperialism, hegemonic succession, and capital’s tendencies towards increasing inter-state rivalries. On the other hand, we want to delve into theories and practices of class struggles, social movements and resistance which create possible alternatives to neoliberalism, crisis and war by constantly challenging the smooth reproduction of capitalism in its gendered, social, economic, political, racial, ecological, cultural and ideological dimensions. In doing so, we also want to enrich our understanding of a Marxian analysis of ‘core’ and ‘periphery’ with an analysis of current developments of Marxism in the South in general and in the BRICS economies in particular. We also hope to continue the theme on Race and Capital inaugurated last year.

We welcome abstract proposals of 200 words on these themes or any others, in all disciplines, from all continents and from all perspectives within Marxism. The deadline for proposals is 15th May 2014.

Separate calls go out for the following streams:

Please note that this year the conference will not be taking place at the main SOAS buildings at Thornhaugh Square.

As business-as-usual continues, annual growth of global CO2 emission now three times higher than in the 1990s, it is becoming abundantly clear that the capitalist mode of production is unable to stave off perhaps the greatest challenge ever faced by civilisation: catastrophic global warming. Rather, it is hurling humanity into the fire with maximum force. Yet capital remains a non-entity in established climate change discourse and politics: unquestioned, unexamined, rarely as much as mentioned. This stream at the HM annual conference 2014 will seek to cast light on the many ways in which the workings of capital raise the temperature of our present and future. Marxist analysis has recently proved a fertile source of critique in this field, but much work remains to be done, on levels of theory as well as of urgent praxis.

What mechanisms are driving the ever-increasing combustion of fossil fuels? How can historical materialist approaches serve to identify the vested interests of business-as-usual? The ecological implications of capitalist development are only now becoming apparent: this might require a rethinking and recalibration of Marxist theories, from the founding fathers to more recent currents (e.g. autonomist Marxism, political Marxism, world-systems theory, feminist Marxism: what do they have to offer; how do they need to be updated?). Dangerous impacts of climate change have already become part of daily life, but they strike unevenly along lines of class, gender, race, location in the world-economy: can patterns of vulnerability be understood – and altered – without a little help from the Marxist tool-box? As people suffer from the heat, capital is not only surviving but thriving, developing new ways to profit from adaptation and false solutions. This calls for application of all the instruments of critical political economy. Given the speed with which the window for meaningful mitigation is closing, any break with current trajectories would certainly require dramatic upheavals: are some of the old precepts of revolutionary Marxism slated for an unexpected comeback? How, for instance, would it be possible to cut CO2 emissions by 5% per year – as science tells us is necessary – without comprehensive planning of the economy? While the scientific community rings the alarm bells ever louder, climate movements are spreading across the world, though nowhere as fast and extensively as needed. With COP-20 in Paris in 2015 on the horizon, strategies for more effective mobilisation should be on top of the agenda.

Although this stream focuses on climate change, that particular problem cannot be extricated from the ecological totality that is capitalism, and so we welcome contributions on related issues of ecology as well. Themes of papers may include: Global capital circuits and their dependency on fossil energy The history of fossil fuel consumption and productionUrbanisation, global cities and global warming Obstacles to a transition from fossil to renewable energyStrategies for radical emissions reductions The politics of international climate change negotiationsPlanned economy as an emergency solution Geoengineering, carbon trading and other capitalist forms of climate change managementClimate justice movements Local environmental struggles worldwide and their links to climate justiceEcologically unequal exchange and imperialism in a warming world Uneven and combined development and vulnerability to climate changeNeoliberal capitalism as an ecological regime Catastrophe as a category of Marxist thought / pitfalls of catastrophismWorking-class environmentalism, past and present Climate change and genderPeasants’ movements Advances in ecological Marxist theory (second contradiction, metabolic rift, capitalism as world-ecology…) Whatever happened to peak oil?Climate jobs and trade union struggles Revolutionary subjects in a warming worldMarxist perspectives on climate change science

The Historical Materialism annual conference in London has emerged as a pivotal site for critical, engaged, constructive, and provocative scholarship and activism internationally. This is a fitting place for focusing the (re)emergence of Marxist-Feminist historical materialist analysis. Now in our third year at HM, the 2014 Marxist-Feminist stream of the conference is seeking contributions that continue in the tradition of dynamic and original reflections of previous years, and also those that press the boundaries and take on the bold challenges posed by debates old and new.

The question ‘how capitalism survives?’ resonates strongly with a range of feminist critiques on the Left. In the 21st century this question invites us to revisit of the history of capitalism and patriarchy in their myriad entanglements as well as to analyse the daily (re)construction of a globally dominant socio-economic model that thrives on gendered and racial asymmetries.

The Marxist-Feminist stream this year wishes to deepen our understanding of the mechanisms that make the reproduction of capitalism possible in the very sites that constitute an ‘everyday life’ where exploitation and struggle are actualised or forestalled. We are also interested in analysing the continuities, discontinuities and mutations of the capitalism & patriarchy nexus from the age of empire all the way to contemporary neo-colonialisms. Such colonial projects may involve anything from territorially-based extraction of surplus value to the production of individual and collective subjectivities.

This year’s conference theme hopes to provide an opportunity to think in truly interdisciplinary fashion about how ‘we’ participate in sustaining capitalism as a reality of intersecting modalities of exploitation. To offer just one obvious example, today the exploitation of women by women has become indispensable to sustaining contemporary capitalism as a planetary biopolitics.

On the basis of the above, we invite papers that may address (but are not limited to) the following themes and/or questions, here presented in random order:

• Critical descriptions of capitalism across Marxism and feminism from feminism’s ‘first wave’ to the present
• Social reproduction and capitalist transformation: micro and macro-analyses
• Instances of success and failure in Marxist-Feminist struggles from the 19th to the 21st centuries
• In what particular ways does the ‘feminisation’ of labour help capitalism survive?
• Are new concepts and methodologies needed to understand women’s roles in capitalism’s ways of overcoming the recent crisis?
• How do the crises of capitalism help generate or overcome otherness (understood in gendered and/or racial terms)?
• Women and queer subjects’ roles in the rise of new capitalist economies and in the assumed decline of Western capitalism
• Homophobia and homonationalism before and after 9/11
• Moving borders, regenerating boundaries: states, bodies, temporality
• Ecosocialism, ecofeminism, ecology: narratives of change or scripts of subjugation?
• Revolution and reform in the theories of Marxist-feminism
• Racism, femonationalism, Islamophobia: the bigger picture
• Intersections of Marxism, feminism, critical race and postcolonial theories
• Sexual assault, rape and resistance
• Women in contemporary liberation struggles
• Marxist feminism and intersectionality theories
• Women’s art, film, music literature: subversion or reproduction of capitalist relations of production?
• Feminism and the reproduction of the capitalist art world
• Women in the communist/socialist tradition: Luxemburg, Zetkin, Kollontai, and others
• Welfare and the political economy of care
• Contemporary sexual politics: resistance to or empowerment of capitalism?
• Violence, fascism, Marxism and Feminism
• Separatism or participation? The case for the 21st century
• Feminism and the institutions of capitalism
• Gender, race and international migration
• Uniting forces: what would an interdisciplinary Marxist feminist theory look like?

Paper proposals should be max 200 words. When submitting your proposal, please indicate the theme to which your paper could contribute.

Please note that we welcome panel proposals. When you submit a panel proposal, please send an abstract of the general theme of the panel (max 300 words) together with the abstracts of the individual papers in the panel. For individual paper proposals, it is helpful to indicate the theme (above) to which your paper could contribute. This will help us to compose the panels. Panels and individual papers should be submitted by June 1st to: http://www.historicalmaterialism.org/conferences/annual11/submit

Please be aware that the conference is self-funded; therefore we are unable to help with travel and accommodation costs.